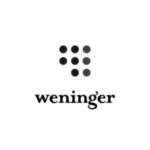 Weingut Weninger, located in Horitschon, a small village in Austrian Burgenland near the Hungarian border, is a family-run business that has been handed down from father to son since the 1950s. In 1982, Franz Ludwing took over the reins of just 7 hectares of vineyards. Since 2011, under the guidance of Franz Rehinard and his father Franz, 28 hectares of biodynamic vineyards have been cultivated, most of them in Blaufrankisch, an internationally recognized grape variety that finds its ideal habitat and best expression on the heavy, iron-rich soils typical of the area.

The large number of hectares mainly includes the red grape variety Blaufrankisch, which is best expressed in iron-rich soils because of its uniqueness. The vineyards reach the age of 80 years, cultivated by means of biodynamic philosophy, so no treatment that is not natural is not allowed.

The same rules apply in the cellar: spontaneous fermentation, maceration of about three weeks in large oak barrels, where it will also be aged on fine lees that can vary from 14 to 18 months. The two labels produced are called “Blaufränkish”, and “Blaufränkish Hochäcker”, both wines that let the grapes express themselves as they are, the result of passion and respect for the naturalness of the place.